As some of you may know in addition to writing on here, I also do weekly reviews of Once Upon a Time for The Nerd Machine. My review for the Season 5 premiere “The Dark Swan” is here. But something I also wanted to do was some further thoughts for each episode that I did not have room for in my initial review. I am not sure if I will do these for each episode, but goodness knows there is always so much to contemplate and explore further. For “The Dark Swan,” here are some additional things to note:

I was overwhelmed by the feedback I was received for the article Captain Swan: A Story of Hands and Hearts Entwined Thank you so much for that. On that note I was so happy to see that this emphasis on hands and hearts continued in this first episode of Season 5. Indeed it was not even subtle to say the least. Firstly, Killian takes Emma’s hand to lead her into the forest towards Granny’s, a sign of comfort and normalcy that she needed. And wasn’t the way they swing their arms so sweet?

But even more significant was when, once again, they show the two of them walking together and make a point to show Killian entwining their fingers together in a close up. This gesture is one of love, hope strength, as well as further validation of the belief that they can take on anything as long as they are together.

The ways hearts were emphasized in this episode was also significant and what was amazing was that we got a parallel to the scene from 2×9 “The Queen of Hearts.” In that scene two hearts were saved: Killian saves Aurora’s (an innocent) heart from falling into the portal, Emma saves her mother’s heart. Additionally, Emma’s heart could not be taken and Cora was blasted back by magic. In both cases these hearts were saved by heroism, love, and protection. In the Dark Swan, we see some clear parallels. Killian attempts to take Zelena’s heart (Cora’s daughter), and is blasted back by magic- a protection spell. Later on, Merida’s heart (another innocent) was saved through love. Just as Emma’s love and protectiveness of her mother saved her heart, Killian’s love and protectiveness of Emma helped her make the right choice and return Merida’s heart. Although, it is not their own hearts, the emphasis placed on the heart motif for their characters only further solidifies how they are undeniably entwined. And calling all you lovely gif makers I would love to see a gif set highlighting these parallels!!

– Killian can still take a heart:

Killian’s Hook is still enchanted and don’t think that does not mean something. How it comes into play is uncertain. Just remember the last time this happened it was not forgotten. He tried to take Cora’s heart but couldn’t because it was not in her chest. So it remained enchanted and allowed him to later on take Aurora’s heart.  There are many theories out there, one being that he may take his own heart out in order to get though to Emma. That would be dramatic and heart wrenching indeed. Bravo to tough-lass for making me cry at just the thought of this.

– She was just holding my hand:

As emmasawn pointed out, the first thing Killian does when they arrive back in Storybrooke is look toward his hand. This is because the last thing they remember is walking into Camelot, so the last thing Killian remembers is holding Emma’s hand. So when he awakes here he looks for her and she is gone. Cue hearts shattering!!

I always think the ways finales and premieres (both beginning and midseason) are good indicators as to where certain story points may lead. For example in the Season 3 premiere “The Heart of the Truest Believer” Gold tells Emma she has never taken a real “leap of faith.” In the mid season premiere “New York City Serenade” she ends up doing just that. She takes a leap of faith and drinks the memory potion that Hook gives her. The finale of Season 3 “There’s No Place Like Home” ends with the friendship between Regina and Emma and Regina’s happiness with Robin thwarted. The last one on screen was Elsa. In the Season 4 premiere “A Tale of Two Sisters”, the first one we see in Storybrooke on screen is Elsa. Moreover, the episode ends with Emma promising to help Regina get her happy ending. And how did season 4 go: with a emphasis on that friendship and Emma fulfilling that promise. Following this pattern, Killian’s prominence seems only natural. The last words of Season 4 were Emma saying “I Love You” to Killian, and he was the last person seen on screen. In the Season premiere, although he is not alone on screen, Killian is at the center of the first scene in Storybrooke. The episode ends with Killian asking Emma why she is doing this. He is the first we see when they return, the last one who speaks to Emma, and the last one we see on screen. This feels like a clear indicator that Killian, and his love story with Emma, will play a significant role in this current storyline- which is only natural given Killian’s significance to Emma and his inherent connection to The Dark One.

Not counting the alternate reality that Isaac wrote, which I do not because it was not really a curse, there is something quite significant about the current curse plaguing the core characters. Up until now Killian was the only character never to have been cursed with memory loss in Storybrooke. It is poetic that the first time this happens it was because of a curse forged by his true love Emma.

– Your touch keeps away the Darkness:

When Emma hugged both Killian and Henry, the image of Rumple disappears, her two true loves helping the darkness disappear even if just for a moment. I wonder if this will lead Emma to trying to keep them close by all the time, especially Killian. Henry seems less likely as she would want to protect him, but Emma knows Killian is capable so it would seem natural for her to seek out his touch and want him to hold her quite often.

I am sure most people caught onto the resemblance of the Camelot castle to Sleeping Beauty’s castle in Disneyland.  But there were more Sleeping Beauty parallels in this scene that were lovely, which you can see here: 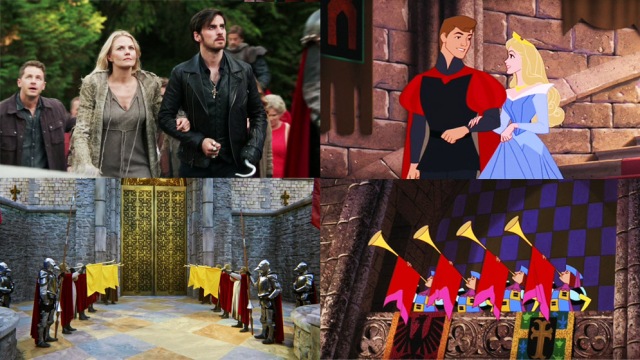 And calling all gif makers, I would love to see a gif set of this please!

Lastly, I was not surprised that the movie young Emma saw at the beginning of the episode was The Sword in the Stone give the inclusion this season of characters such as King Arthur and Merlin. But what makes me happy and excited for what is to come was that this is also the move in which Merlin says that Love is “The most powerful force on earth.” Give that Once Upon a Time lives by the theme “True Love is the most powerful magic of all” I cannot wait to see what is in store for the rest of the season. Whether is it love for or given by Emma (cough she truly loves Killian), Love is bound to be a powerful force in Emma’s battle against the darkness.

3 thoughts on “Once Upon a Time : “The Dark Swan” Further Thoughts”